Sunday evening and what could me more ideal for “battery charging” for the imminent week, than a live concert. The “teasers” from the previous days’ appearances in Greece, already “spread” in the internet, had created great expectations, for the completion act of a mini tour, that Skyclad for one more time, chose to fulfill in our country, in a “best of setlist”, as had already been “leaked”.

Programmed start at 20.30 and in British punctuality, Dreamrites did not …. delay one second. Coming from “brave-meta(l)ads-breeding” Larissa City in the center of Greece and being “communicating vessels” with the worthy Murder Angels, as the majority are common members in both bands, came out in incredible mood and with the audience having, wisely, decided to arrive early, in order to see their show. 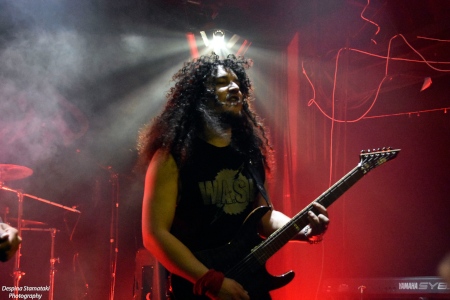 “Stiffly shaped” band, with amazing energy, “consistent” headbanging, showed that they enjoy every moment on stage, an element that soon became “common ground” with the attending audience. I, personally, believe, that their frontman Alexandros Siderakos, is really worthy, having an especially “attractive” voice, and is, indeed, communicative with the fans. Unfortunately, his vocals’ sound outcome, in contrast to the total sound of the band, confronted some problems, which did not let us enjoy him fully. 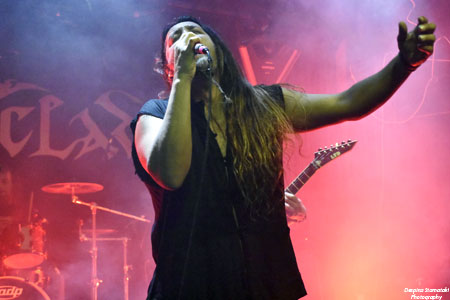 A fact, that couldn’t alone damage their wholistic picture and the, more than satisfactory, result of their show. Songs derived from interesting ideas, while especially provoking have been their “polymorphic inspirations”, as the upcoming, “summerish”, “So dark inside” and “Thunder & Lightning”, where speedy rhythms, “switched place” with “balladish” parts, in a harmonic and attractive “coexistence”. Highlight, undoubtedly, the amazing “Redeemer”!! I D E A L warming up act, earned a sincere acceptance and recognition of the crowd, in a, nearly, 50minutes show!! 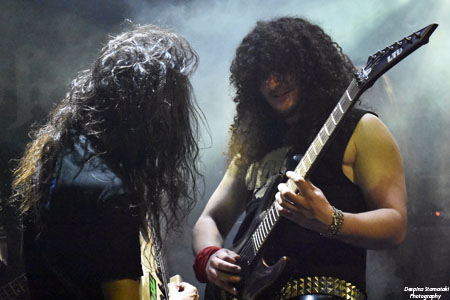 Dreamrites setlist :
Lord Hypnos/Dreamrites
Only Time Will Tell
So Dark Inside
Eternity
The Redeemer
Thunder and Lightning
Lament of Sorrow
With Blood We Pay 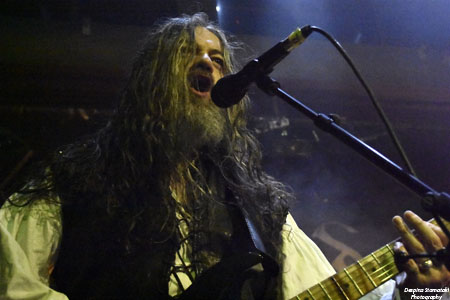 It was at the end of Dreamrites’ show, that Georgina Biddle, “armed” with her packed violin, passed among the crowd, heading for the stage. Preparations were about to end and the crowd did not wait for the first note, in order to start with its initial band cheers, which soon started to “vibrate” the venue, that had already “dissapeared” as a space entity, “covered” with people, up to the exit door.

“Earth Mother, the Sun and the Furious Host” begins, and it was obvious, that we were “meant to live” a folk rock/metal “fest/party”, one extracting as wished, and according to the moment, rock or metal notion. That, for the attendees was really of no importance. 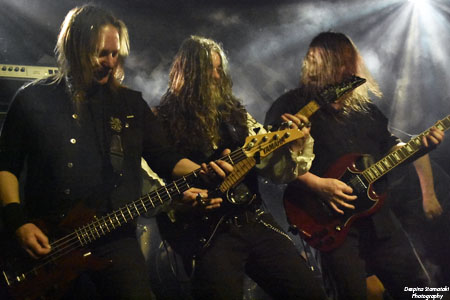 “Spinning Jenny” and Temple Club is literary “on the air”, jumping up and down, while Ramsey becomes first-eye witness, being absent back in 2017. “Another Fine Mess” and such one, is about to come. Skyclad, have already depicted on their faces, a happiness smile, for what takes place in front of their eyes. The band’ s sound …. “Who gives a f#c^ about the sound, man?(!)”, when such amounts of feelings exist, above and below the stage (for the records, sound was without issues)! 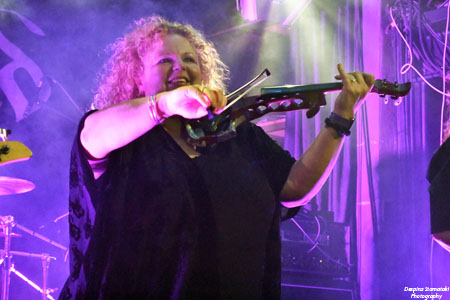 Ridley tells us about Pugh, group’ s last re-addition 2 years ago, and “Change Is Coming” begins. Georgina steps nearest to the crowd and her special impact to them “is revealed”. “Cry of the Land” to continue and their frontman and former producer of the band, in great shape and mood (besides the numerous shows in Greece last days) and with a significant chemistry with the audience, continues with a story for their show in the small village of …. Thessaloniki, which finally leads to “The Song of No-Involvement”. Folk and medieval aesthetics, “dreamy voyages” pop out each time from Georgina’ s bow, flourished with medieval elements in some band members’ clothes, it feels as if you were travelling through the Highlands in another era.

“Cardboard City”, “No deposit no return” and beautiful things take place! First stagediving και crowdsurfing of the night, along with Pugh’ s first solo. Things have gone really crazy in the venue, Skyclad screams “vibrate” the building and emotionally charge the audience. “The One Piece Puzzle”, and it’s Ramsey’ s time to go “solo”. 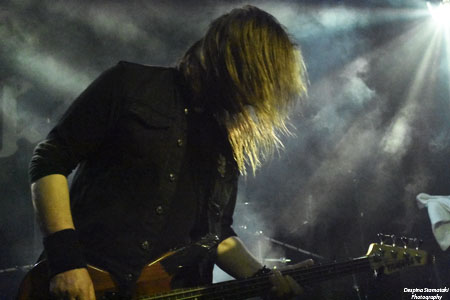 The setlist really proves to be a “best of” and it’s divided brilliantly through their whole history. We’re just reaching at the breath-taking song from their last album “Words Fail Me”, a huge example that Skyclad still produce “diamonds”.

Ridley warns us that the party is (now!) about to start (!) and has only 30 minutes of duration left, and so we enter the point of the last “musical miles”. “The Widdershins Jig”, and the crowd goes wild once more in a festivity atmosphere.

“All the seats are taken in The Parliament of Fools”, a song that he has already heralded that we will definitely like, because of our politicians and love for the police (great, the contemporary fame of our country abroad (not)!).

Next three songs are “The Antibody Politic”, “Great Blow for a Day Job” and “Penny Dreadful”….. errrrr, what can I say? No ideal words to describe the “chaos”!

Titanic “Anotherdrinkingsong” to continue and Shakepeare meets Kazantzakis, in a “Zorba the Greek” edition, just to reach the end of the show’ s “main body”, with another huge song, the “Inequality Street”. Temple Club is “shaking” and feels out of air, with “hung” headbangers, above our heads…

Time for the classic encore had just arrived and the comparison with the “leaks” from the previous nights, inevitable. Finally, they chose to play exactly the same songs, striving them in two instead of three encores, because of Ridley’ s declared “vocaling surrender”, due to the continuous, demanding live performances. 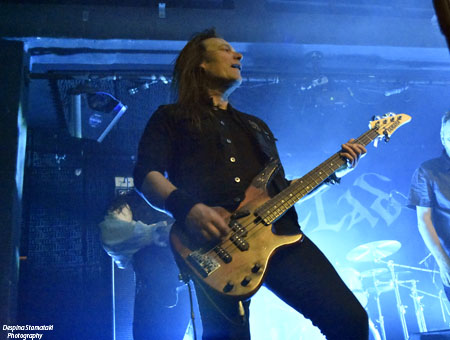 Dedicating, humorously, the introductory “Just What Nobody Wanted” to his “room-mate” English, Ridley continued in company, with the cover of Thin Lizzy’ s “Emerald”. “I’ m thinking aloud, is Thinking Allowed” and the first encore reaches the end.

“Oeoeoeoe Skyclad Skyclad”, in one of the numerous times of applause in the night, and here they are back for the last combinational, “musical orgasm” of the night. “The Wickedest Man in the World”, “History Lessens” (where Georgina sang), “humongous” “The Declaration of Indifference” and, in sad feelings, the night was over, “with no voice left”, probably for most of the attendees!

The description above, probably depicts the picture in the minds of most of the audience,  more intensely than the writer’ s, in an effort of exact depiction.

If I had to write a disadvantage….“Fv@+ it man, I won’t say nothing, cv^t”, as Skyclad’ s fellow British people would say, as world representatives of aristocratic behaviour! Besides, it would turn out to be extremely cliché, with common ground in many fans’ minds. No use!
The only truth of the night, has two “faces” :
1)    Not many times, have I seen an audience, leave a concert so full, that if they could, would return for the same the night after
2)    Skyclad, proved in this live AS WELL, that they were in the past and remain generally, a very significant band, apart from the fact, that they, essentially, “invented”, “perfected” and preserve alive folk rock/metal sound.

Skyclad setlist :
Earth Mother, the Sun and the Furious Host
Spinning Jenny
Another Fine Mess
Change Is Coming
Cry of the Land
The Song of No-Involvement
Cardboard City
No deposit No return
The One Piece Puzzle
Words Fail Me
The Widdershins Jig
The Parliament of Fools
The Antibody Politic
Great Blow for a Day Job
Penny Dreadful
Anotherdrinkingsong
Inequality Street
(Encore:)
Just What Nobody Wanted
Emerald (Thin Lizzy cover)
Thinking Allowed
(Encore 2:)
The Wickedest Man in the World
History Lessens
The Declaration of Indifference 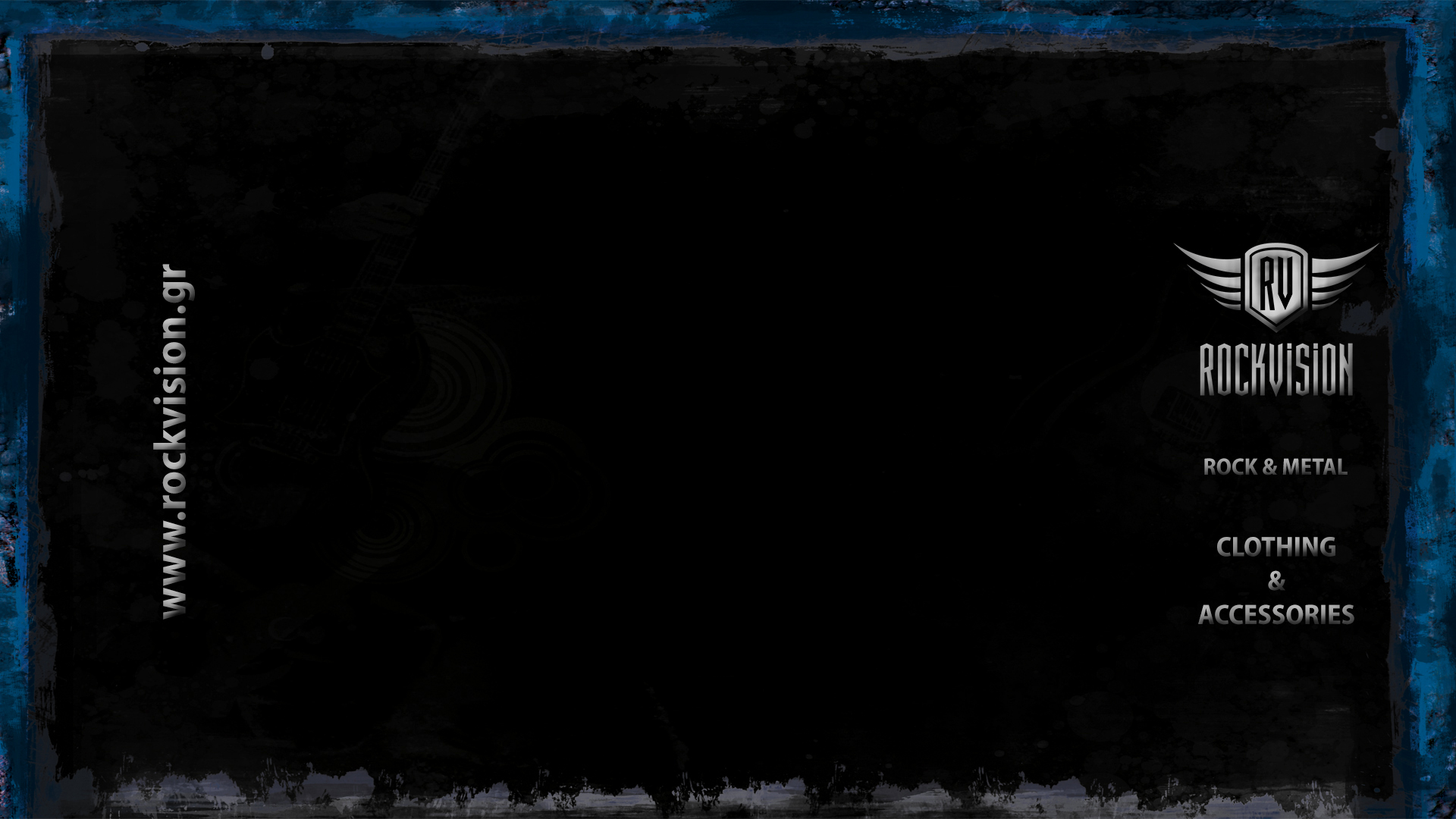